Guide to Mobile IoT: Choosing Between LTE-M and NB-IoT

In this final feature of a series of excerpts from a recent white paper published by Telenor Connexion, we look in detail at the difference between LTE-M and NB-IoT, as a guide to make the optimal choice for your business.

Adaptability to New Use Cases

When choosing a connectivity technology, the complete lifecycle of the connected product must be taken into consideration. Enterprises need to choose a technology that can grow with new use cases.

Initially, it should just be possible to open and close the door and the door should send usage statistics every night to the cloud. The typical door has a lifecycle of 10 years. After just looking at the initial use case, the data amount is very low, so the focus is on technology with the lowest bandwidth and the door is mass-produced and successfully launched.

After three years the enterprise wants to monetize this success and add new value – the door should not just connect, but also interact with a parcel delivery service. For use cases where the application can be expected to evolve over time it is thus important that the whole solution has the potential to develop. LTE-M provides greater potential to grow over time.

Due to its wider bandwidth, LTE-M provides more adaptability to new use cases where the use cases of the IoT solution will develop over time. NB-IoT is an alternative when the requirements are more static and known from the start.

Due to the shutdown of 2G and 3G networks in many parts of the world many legacy use cases need to be transferred to new connectivity technology.

We believe that 2G technologies will continue to be available in many parts of the world and outlive 3G. In Europe we anticipate 2G will be available until 2025, due to the legally required emergency services in the EU which depend on 2G technology.

As the coverage of LTE-M and NB-IoT deployments may not, as of today, be good enough everywhere, we recommend enterprises verify coverage in more detail and/or ensure devices are compatible with existing technologies as a backup.

IoT use cases will eventually move from old to new technology. As LTE-M meets or exceeds the technical characteristics of 2G/3G services, it appears to be a natural, evolutionary step. NB- IoT has lower responsiveness and limitations in mobility and may be relevant for use cases with lower requirements.

We believe that LTE-M will be the first to become a globally available technology as it has technically been designed for roaming from the start, like all other 2G, 3G, 4G, and 5G technologies. NB-IoT was initially designed for static devices only, and roaming has been added later as an afterthought.

Operators will be more reluctant to support incoming roaming NB-IoT devices that use network resources, but hardly generate revenue. Roaming on NB-IoT will most likely be limited to the business units within an operator group. We expect that LTE-M roaming will be available globally in the coming years, similarly to normal 4G roaming, and it is indeed already available today as a best effort offering on existing 4G roaming contracts.

LTE-M has been designed for roaming from the start and can leverage existing roaming and wholesale business models between operators. NB-IoT will require new business models to be a good alternative for global connectivity. Therefore we expect that LTE-M will be relevant for international IoT solutions earlier than NB- IoT.

IoT devices can have a typical life span of 10 to 15 years. For many use cases it is desirable to update the software in the device several times over its lifecycle. Therefore, enterprises must choose a technology that can handle updates to work with modern software development practices – and to keep devices secure.

The characteristics of NB-IoT mean it is not suitable for upgrading large fleets of IoT devices. This is expected to be addressed in a future version of NB- IoT, called NB2. In this variety, software upgrades can be managed using multi-cast.

This means that there will be two varieties of NB-IoT available – NB1 and NB2 (also sometimes called LTE-cat NB1 and LTE Cat NB2). The current status is however that today most networks only support NB1, and it may take years before NB2 is widely available.

Increased security improvements and the agile software development methods used today, will continue to drive software updates. This has a large impact on the bandwidth consumption during the lifecycle of devices which is often underestimated. LTE-M is considerably better at handling device updates as its higher bandwidth can handle more data.

Previous mobile technologies all support devices that can move around without connectivity being interrupted. Devices constantly measure radio signals of nearby radio towers (cells) in the network and dynamically and seamlessly adjust their signaling to different towers (cells). Here we see significant differences between NB-IoT and LTE-M.

NB-IoT is designed for static devices. It is designed to increase battery life by reducing the measurement of signals to nearby radio towers (cells). When NB-IoT devices are moved, sessions may get dropped, or devices may need to reconnect. This can lead to interruptions and reduce battery life. This makes NB-IoT less suitable for moving devices.

LTE-M on the other hand is designed for moving devices, just like 2G, 3G, 4G and 5G. LTE-M can support moving devices without losing data sessions, at speeds of up to 200km/hr.

LTE-M is the better choice for moving devices as it has been designed for this from the start. As NB-IoT is designed for static devices it can lead to interruptions if devices are moved.

If devices need to be remotely controlled, responsiveness is important.

Not all use cases need a fast response and it may for example be perfectly acceptable to wait 10 seconds for sensor readings.

When there is human interaction a slow response risk being perceived as poor usability, which could harm the brand perception of enterprises.

LTE-M is needed for a fast and consistent response, while NB-IoT can handle use cases where a delay of minutes is acceptable.

LTE-M is designed for voice and the specification includes Voice over LTE (VoLTE) – which is deployed by 194 operators in 91 countries.

Today however, VoLTE is not globally available in LTE-M networks and there are not many hardware modules that can support VoLTE over LTE-M. We expect that VoLTE will grow in importance in the coming years in LTE-M, just as it did in the consumer market for LTE.

The bandwidth and especially the responsiveness of LTE-M can also be used as an alternative to Voice over IP solutions. Devices need to respond quickly to calls and must be able to send and receive data at the same time (full-duplex). Only LTE-M can support full-duplex communication.

NB2 adds push to talk technology to NB-IoT, only one party can talk at any one time because the technology is half-duplex, like walkie-talkies used to be.

LTE-M is designed for voice with Voice over LTE and can also be used for Voice over IP with full-duplex. NB2 adds push to talk technology to NB-IoT but only at half-duplex.

Physically swapping the SIM card of deployed devices can be a costly and complicated process, especially in an IoT environment. SIM cards with eUICC technology allows switching of identity over the air, without the need for physical replacement of SIM cards.

When the life cycle of connected devices is longer than the commercial agreement with an operator, the eUICC technology makes a change of operator possible. eUICC can also be used for devices deployed in locations where roaming is not possible. While eUICC is still in an early stage today it will become a vital technology for large and international deployments of IoT devices.

Not all operators support the combination of NB-IoT and SMS which means that eUICC cannot be initiated in many networks. The bandwidth of LTE-M is also more suitable for transmission of SIM profiles, just like software updates. Enterprises considering eUICC should therefore also consider LTE-M.

Time to market is essential when launching new products. Connectivity technology is only one aspect of the product. Access to people with the right competence is vital to ensure time to market which is why many enterprises choose common technologies over specialized technologies. Common technologies make product development faster, and product maintenance more cost-efficient, because it is easier to get access to developers and other specialists.

The internet is built on technologies like IP, TCP, UDP and TLS. These protocols are familiar and easy to use for developers, as they hide much network complexity and are easy to scale without central control.

NB-IoT is designed to perform in local deployments, for example connecting streetlights in a city. Here it is not necessary to use standard internet technologies, such as IP.

Enterprises can access their devices through the Service Capability Exposure Function (SCEF) provided by the network operator. SCEF simplifies the access to devices by hiding the complexity of the operator’s network making device access familiar to application developers.

Today SCEF is available in some networks for local deployments. Enterprises that would like to use NB- IoT without IP would need to connect to all individual NB-IoT operators that support SCEF.

The roaming and interworking of SCEF is standardized, but it will take several years before SCEF are widely deployed and roaming is available.

Deciding between the new mobile connectivity technologies, LTE-M and NB-IoT, requires an understanding of the key differences between them.

LTE-M and NB-IoT are both globally available, vendor-independent technologies, based on open standards. With the introduction of eUICC enterprises can take a commercial decision based on the most suitable technology and irrespective of operator.

Both LTE-M and NB-IoT enable relevant use cases and are telecom grade, which means they operate on dedicated radio frequencies in telecom networks with a proven capability to scale, and with committed support through the whole life cycle from the operator.

For Most International Use Cases LTE-M is the Preferred Alternative

Choosing the right connectivity technology is one of the critical decisions when implementing an IoT solution. The right choice is essential for deploying a well working solution in a cost efficient way and that can develop over time. New mobile IoT connectivity standards, LTE-M and NB-IoT, opens up for new and evolved use case by offering better coverage, longer lasting batteries and/or lower device cost. In addition they offer a future-proof path as 2G and 3G networks are gradually sunset across the world.

For most international IoT solutions LTE-M will be the preferred connectivity standard as it is expected to become globally available faster and to be more straightforward when developing and maintaining applications. NB-IoT may still be the better choice for some applications, -for example for very large scale sensor networks where the requirements are known at deployment and the best possible indoor coverage is absolutely essential.

As of today neither LTE-M nor NB-IoT are deployed widely enough to be solely relied on for international fleets of devices. For now it is recommended to use hardware that is able to use LTE-M or NB-IoT as well as networks with mature footprints, for example, 2G and/or 4G.

The deployment status of mobile IoT network is developing rapidly and therefore the right setup will vary over time.

Independent on the choice of technology standard, Telenor Connexion can help you with all your connectivity needs. Get in touch to find out more about the first steps to take for your low-power, wide-area IoT application. 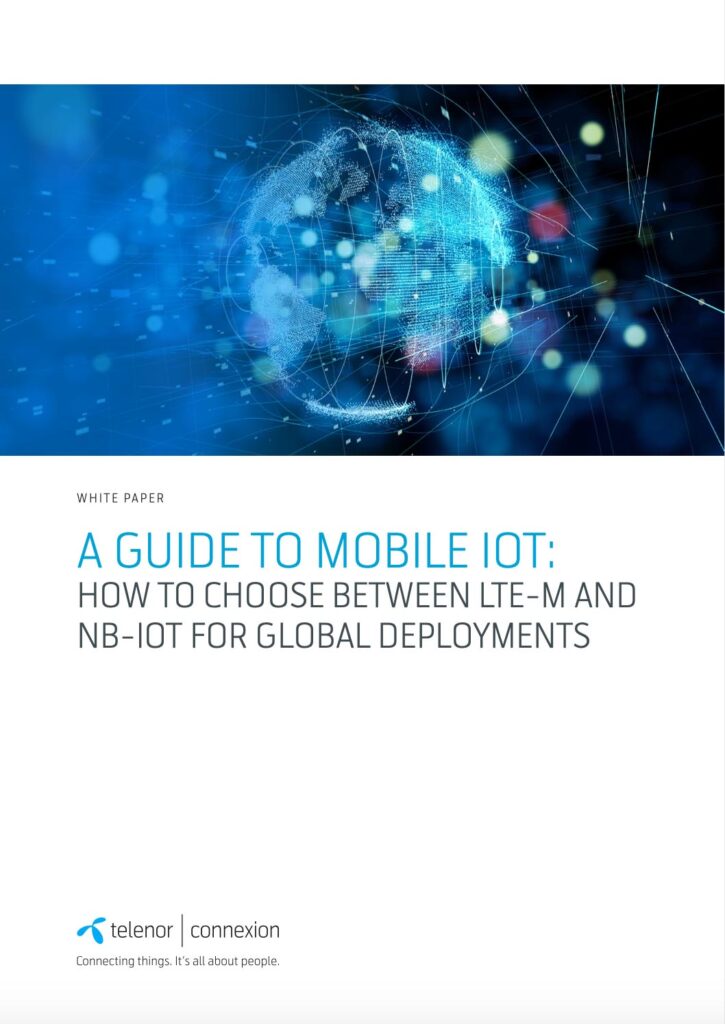 Want to know more? This feature is an excerpt from a white paper published by Telenor. Please either log-in or subscribe for access.

Data usage note: By accessing this content you consent to the contact details submitted when you registered as a subscriber to fieldservicenews.com to be shared with the listed sponsor of this premium content Telenor Connexion who may contact you for legitimate business reasons to discuss the content of this white paper.