Does the flow of asset data and cross department collaboration plot the path towards servitization?

In the final section of the study, we focused on two areas to help add further meaning to the overall study and context to some of the trends we had already seen emerge.

The first of these was to identify which of the organizations within the study had implemented or were developing advanced services or servitization strategies and see if there was any correlation between the widespread use of asset data across the organization and cross-department collaboration.

Just over half (52%) of the companies within our response set stated that they offer some form of advanced services/servitization within their service portfolio.

To help identify trends amongst these organizations regarding asset data flow, we compare some of the responses from this subset to those we have already reviewed, looking at the complete data set.

Firstly, when we review the responses to the question “Do you believe the field service business unit receives enough data from your assets in the field into your systems of record to positively impact your field service operations?”

We see a significant increase in the percentage of respondents stating that asset data is readily available and is used effectively within their organization. In the complete response set, less than half (43%) of respondents state this to be the case. When we look at those companies that have adopted servitization, this figure moves upwards to almost two thirds (61%). (Fig 12 below)

When we look at the responses to the question ‘what percentage of your install base is capable of providing asset data remotely from the field into the relevant system of record (i.e. the assets are connected via IoT)?’

We again see that those companies that have adopted a servitization model score significantly higher on average in this area, with 52% of assets amongst these companies being able to provide asset data remotely compared to just 32% for the whole group.

Similarly, within the main group, only 41% of new assets are IoT enabled, while amongst those with some level of servitization adoption, this number increases to 66%.

However, perhaps the most revealing finding within this comparison is when we look at the percentage of companies within the servitization sub-group who state that asset data gets shared with other business units within the organization.

While the number for the complete response set was already high at 82%, when we look at just the responses from organizations who state they have some adoption of servitization, the sharing of asset data across a business is universal, with 100% of respondents stating this is the case within their company.

It would undoubtedly appear that the better flow of asset data across a business is either a driver for or a bi-product of servitization.

As we take a similar approach to understanding cross-department understanding and collaboration, we again see interesting trends emerge.

Perhaps the most striking first observation that can be made here is that as we reflect on the responses from this sub-group to the question “How well do you think other business units have an understanding of the value of field service to the wider organization?” we see the almost complete reduction of respondents believing that their colleagues in other departments had a poor understanding of the value of field service operations.

Indeed, this level of response is now solely within the IT department, which, interestingly, a fifth (20%) of respondents still feel to be the case.

In the main though, as we look at the comparative data, we see all other departments being consistently marked as having a better understanding of the value of field service within this sub-group than we do in the data from the total respondents.

This is particularly clear when we look at the perception of understanding across the marketing and sales departments, both of which our respondents state they believe 100% of their colleagues in these departments have a good or better level of understanding (compared to 75% and 82% respectively.)

Similarly, across the board, we also see far greater collaboration on a more frequent basis as we look at the percentages respondents stated they worked with colleagues from other departments, we see an increase within the servitization sub-group across every department listed.

While we shall be exploring this phenomenon in greater detail within our follow up interviews in the second phase of this research project, the data within this qualitative study certainly appears to support the hypothesis that there is an identifiable correlation between the flow of asset data, the likelihood of collaboration across departments and the adoption of servitization within an organization.

Having identified these trends, let us now see if this correlation extends to better overall operational performance outside of the parameters of servitization also.

Having identified a correlation between asset data flow and servitization, in the final segment of the study, we wanted to see if that correlation also holds in terms of core performance metrics that are generally accepted as indicators of best-in-class performance.

In this final section of the report, we shall compare the reported performance of organizations of those organizations who stated they have a flow of asset data across different business units and those who do not. We asked our respondents to rank their performance in several critical areas out of 10, (with ten being excellent and 0 being very poor)

The results here were comprehensive. In every metric we asked our respondents to rank their performance, those who had previously indicated that asset data was shared across the organization stated a higher performance.

Want to know more? Field Service News subscribers can access the full report on the button at the top of this feature.

This Field Service News Research study is sponsored by ServiceMax 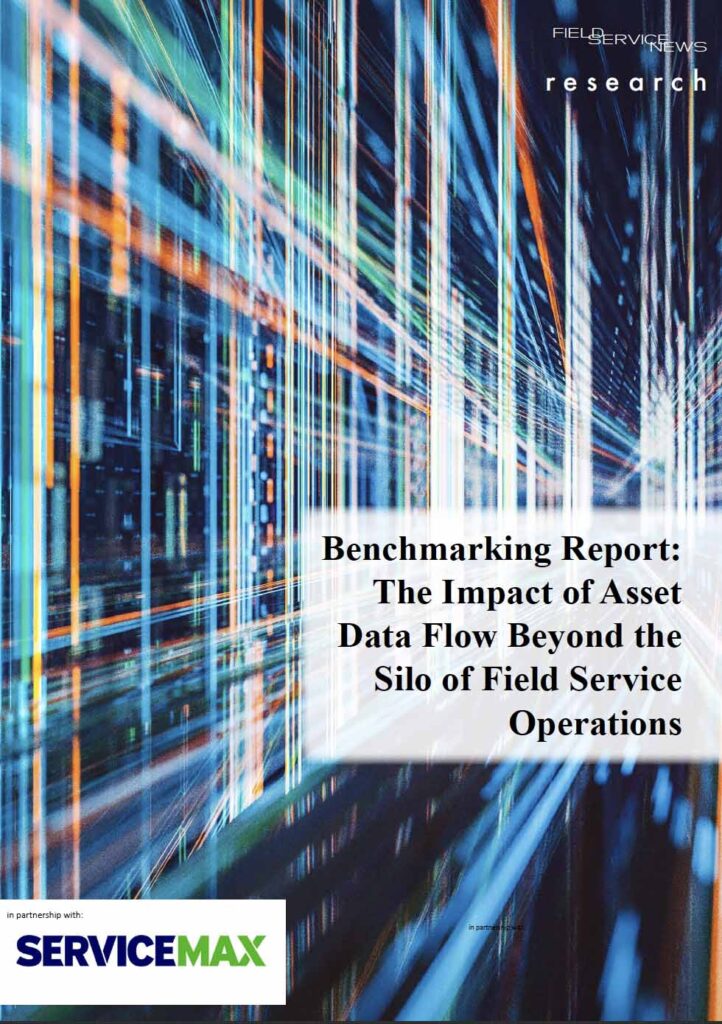